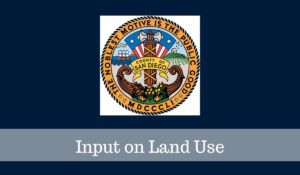 Mr. Victor Avina, Senior Land Use Policy Advisor Office of Supervisor Greg Cox County of San Diego, has kindly sent the SVCA this report on planned land use from the National Association of Counties meeting in December.

Sweetwater Community Garden:
– Construction bids came back and there was a $91,000 delta
– County Parks and Recreation can’t award the contract until all the funding has been identified
– The County Board of Supervisors are considering adding $91,000 to the budget for this project during its First Quarter Operational Plan Budget Adjustments on Tuesday, December 11.
– After this, the County will look to issue the Notice to Award shortly thereafter.
– Look for action onsite in the first half of January

Bonita Library Expansion:
– On Tuesday, December 11, the Board of Supervisors are considering adding $900,000 to the Bonita Library Expansion project
– funds needed for costs related to revised project requirements, primarily for required upgrades in the existing structure to accommodate the planned expansion

Sweetwater Loop Trail:
– On Wednesday, December 12, The Sweetwater Authority board is considering a loop trail around the Sweetwater Reservoir.
– The meeting was in their offices at 505 Garrett Avenue, Chula Vista, at 6 p.m.

Bonita Glen Apartments:
– project proposes 170 apartment units on a parcel located just west of the 805 freeway and south of E St. / Bonita Road, in the City of Chula Vista
– project is adjacent to County jurisdiction, however
– County provided initial comments to City of Chula Vista (see button below)
– project is very early in planning stages, City has not decided which type of environmental document they will do
– Requested a traffic count on Pepper Tree Road, as some residents expect it to be impacted by project
– Supervisor Cox is continuing to monitor progress on this project

Ace Self-Storage Unit:
– County staff is working with the applicant to provide responses to comments received during the public comment period
– will take several months to complete

Thank you to Mr. Victor Avina and Supervisor Cox for providing this report and keeping our community informed.

Click the button below to view the letter from the County of San Diego Planning & Development Services with comments on plans for the Bonita Glen Apartments.