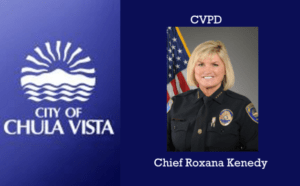 With Police Chief David Bejarano Retiring, the City of Chula Vista made history as they promoted their police from within for The very first time and made new Chief Roxana Kennedy Chula Vista’s First Female Police Chief!

Chief Kennedy oversees 224 officers and a budget of $50 million. She will focus on being a champion for police work and the dedicated men and women who serve. She also plans to improve customer service during her tenure.

As a Police Officer, Kennedy established a reputation for an outstanding work ethic, professionalism, commitment to the community, and dedication to the job. Her passion for police work and providing the highest quality of service to the community is evident in her remarkable career. Congratulations Chief Kennedy!